The new 3 Series is arguably one of BMW’s most important new models this year. But before you rush to put your money down for one, take some time to consider your options carefully.

This is the new BMW 3 Series. One could almost take it on faith that it will be everything a driver ever dreamed of at this price level. But at CarBuyer we always encourage you to put down the Kool-Aid, at least until you also tasted the Mountain Dew.

Having spent an inordinate amount of time of my youth trawling web forums, I realised the existence of a significant number of buyers who insist that they can plonk down money (and a lot of money at that) for a car without so much as a test drive.

The arguments I’ve often seen for this are that 1. Cars are all the same anyway, or 2. They know what they want, no need for a test drive.

Reason 1 applies to unfussy people who are easily satisfied with just about anything, so long as it has four wheels and doesn’t break down. Reason 2 encompasses enthusiasts going for specific models, like Porsche 911s, which are known quantities to their loyal fans. They know what it’s like, and they’re gonna get it anyway since it’s unlikely to differ much from what they already know.

CarBuyer exists because of its expertise here, and since a car is something that you will probably use every day, we encourage you to test it out thoroughly before forking out your hard-earned cash – no matter what badge is on the bonnet.

Take the new BMW 3 Series for example. This is a car that takes up nearly 20 percent of BMW’s overall sales volume worldwide, and is effectively its bread and butter, the one that keeps the company running.

But despite that fact that this new 3 Series will in likelihood sell like hot cakes as usual, it still stands to reason that one should take the time to get to know the car better before you go ahead with putting your money down.

The reason for this is simple. At the moment, there is only one engine variant for the 3 Series, the 330i. A 320i will arrive next year, with a 318i a definite possibility, though BMW has not confirmed the latter.

For here and now, the 330i has two trim levels you can select from, the standard Luxury spec, and the top-level M Sport that you see here.

READ MORE: Everything that’s new about the seventh-generation BMW 3 Series

The difference between the two goes beyond mere extra equipment and a sporty body kit. The more expensive (by $15,000) version also adds M Sport brakes and suspension, and boy does it make its presence known.

If you enjoy a rock hard ride from an unwaveringly stiff suspension, then the M Sport would probably be up your alley. I suspect however that most ordinary BMW buyers would much rather enjoy a smoother, more comfortable commute, and a car that has the capability to knock out your teeth every time you pass through a construction zone may not go down all that well.

The ride feels harsh even in default Comfort mode, which is such a shame because the rest of the car is such a lovely driver’s package. Find a nice bit of winding road (hopefully without road imperfections), set it to Sport, and the 3 Series positively shines. Everything sharpens up, from the steering to the throttle response, and there is a remarkable balance to its chassis that makes this unmistakably the class best in handling.

This is despite the 3 Series having grown a fair bit in size, which is another reason why one should check the car out before committing to purchase, because the dimensions do take some getting used to. The new car is 76mm longer and 16mm wider than its predecessor, and while that translates to much better interior room for passengers, it can be a bit tricky to negotiate the car around tight spots. Let’s just say that you’ll be thankful for the many assistance cameras on this car when it’s time to reverse into that shopping mall parking lot.

There’s plenty of other fancy tech sprinkled throughout too, and nifty innovations include the updated iDrive (now called BMW Operating System) with customisable pages, and the Intelligent Personal Assistant voice-command system*, which recognises conversational instructions (like “Hey I’m cold!” to turn off the air con), both of which were first seen on the new X5. And of course there are the now common and ubiquitous safety and convenience items like parking assist, lane departure warning and collision warning as well, all of which are present and correct here.

The thing is though, all of these are also available on the Luxury trim, and if you’d rather lose the harsh ride that the M Sport kit offers (which includes the styling package, suspension, brakes and 19-inch wheels), then it may be worth exploring that avenue. The only other big ticket items you lose out on are the head-up display and Harman Kardon sound system, both of which are available as options anyway, so you could probably ask to add them back in with the 15 grand you save over the M Sport.

Fundamentally, both versions should be more or less the same, and unless you travel on windy mountain roads on a daily basis, it could be well worth your while to take the new 3 Series out on a proper test drive to see which flavour best suits your taste.

Verdict: M Sport suspension is very harsh, but the rest of the 330i is a sparkling driver’s package that should please many. Choose your spec carefully.

*Note: The Intelligent Personal Assistant system is available to owners for free for the first three years. BMW Asia are currently working on a price plan for subsequent renewal of the service, details of which will be released at a later date. 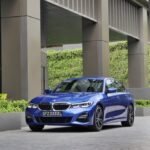 Ben Chia
CarBuyer's senior staff writer went out to explore the Great Big World, including a stint working in China (despite his limited Mandarin). Now he's back, ready to foist upon you his takes on everything good and wonderful about the automotive world. Follow Ben on Instagram @carbuyer.ben