SINGAPORE
The history of the Audi A6 can be summed up like so: The Audi A6 is an excellent large luxury sedan from Germany with almost no shortcomings. Its two main problems have always been 1. The Mercedes-Benz E-Class and 2. The BMW 5 Series

Accordingly this review isn’t about which of the three is ‘the best’.

No it’s not a cop-out. Honestly at this price range – S$350k with COE – it’s not about which model is the least expensive, nor the best performing, but which badge you pledge allegiance to the most. Samsung vs Apple comes to mind here, if you want another analogy.

The price makes sense once you figure there’s a 3.0-litre V6 under the bonnet, obviously we’re in premium territory here. Audi Singapore says there will be an A6 2.0, the only question is when, and we presume there will be a high-performance S6 as well.

For now this 3.0 is the only A6 here, so we’re looking at a key rival in the form of the BMW 540i: Read our review of the BMW 540i and you’ll see that the A6 and it are an utter dead heat on paper: Same power, same 0-100km/h, even the exact same fuel consumption and CO2 emissions.

On the three-pointed star front, there’s an indirect rival in the Mercedes-Benz E 350e – a more direct competitor is the E 400, which isn’t sold here.

As covered in our international debut drive of the A6 in Porto, Portugal last year, this is the eighth iteration of the A6, since Audi counts from the original Audi 100 of the 1960s, not the first car named ‘A6’ in 1994.

Everything is new: MLB Evo platform, a full-aluminium outer skin, the latest twin-scroll turbo V6 3.0 (as seen in the A8, A7 Sportback, and some Porsches) that now has the benefit of a hybrid 48V system, and entirely novel interior concept as well.

Unlike Mercedes-Benz’s take on mild hybridism (mild hybrid = can’t move on electric power alone) as seen lately in the C 200 sedan and CLS 53 four-door coupe, the A6’s e-motor doesn’t actively add power/torque to the drivetrain, but it does add extended capability for start/stop and coasting at speeds of 55km/h to 160km/h, which Audi says recoups up to 0.7L/100km.

Not that the A6 3.0 needs more grunt anyway, the V6 engine is perfectly smooth, the start-stop action equally polished. The AC doesn’t immediately become hot either, so haters of start-stop will be far less inclined to switch it off.

0-100km/h in 5.1 seconds is plenty quick, and it’s not thump-you-in-the-back punch, but easy, business-class progress. One complaint about Audis is their apparent lack of character compared to rear-wheel driven Germans, but we’ve always thought of Audis as a blank-er slate the better to impose your own driving style on.

What no driver will complain about is the four-wheel steering ($10,995, bundled with sunroof (it’s a package pricing thing)), which gives the car a much pointier front end, and an amusingly small turning circle – a must have for Singapore.

With 20-inch wheels and adaptive non-air suspension, we feared the car would have the jiggly Audi ride that randomly appears without warning, like in the Audi A8 luxury limo with its curiously busy ride quality.

Our fear was misplaced, as the A6 has a lovely setup tending towards sporty that still excels at comfort, and even does a better impression of a limo than the A8 does, ironically.

A keen driver can easily exploit the A6’s blank slate and sum up anything from easy cruising to quick blitzes, it’s certainly more of a ‘Whatever you wish, sir’ than ‘Burn rubber NOW you chickenshit!’ kind of car.

Audi’s new design direction can be summed up as ‘technological monolith’, an idea that the precision of the lines and creases on the car’s body backup. The A6 looks more exciting than it used to, as a result, but the interior is where the big evolution takes place.

That feeling of almost clinical precision reigns here, partly because most of the buttons have been replaced by Audi’s new HMI (human machine interface), dubbed MMI Touch Response.

A lower 8.6-inch touchscreen display controls the climate and convenience functions, while the upper 10.1-inch touch display is the nexus of the HMI, both well integrated into the car’s design.

As expected of a modern, luxury infotainment system you can tap, long-press, scroll, pinch-zoom and swipe your way to just about anything, and you also have extra-clever features like Google search integration, natural voice search, and more.

It all looks terribly high-tech and even quite beautiful – the 10.1-inch screen rests in a monolithic chrome-lined buttress – but like Porsche’s new touchscreen infotainment system, it’s best used when the car isn’t moving. Our own preference is toward rotary controllers rather than touchscreens, as the latter tend to be more distracting to use.

Like mid-upper tier big exec sedans, the A6 3.0 comes packed to the gills with equipment so no FOMO here, everything from LED Matrix lights, to an auto tailgate, advanced external view camera (you can look at the car’s outside from the inside).

In other words, everything you expect a big German luxury sedan to have is here, expressed in Audi’s own cool, aluminium-and-technology-toned aesthetic.

Audi fans have nothing to worry about, since the A6 gives up nothing to its competitors. Newcomers to the brand might wonder what the fuss is about, if at all. Our advice is that test driving the new A6 3.0 might go some way to helping you understand that. 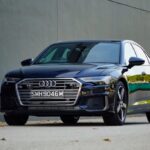