The BMW that enthusiasts know and love is steadily evolving into something unrecognisable; luckily the M2 Competition is a thrilling throwback to when “BMW” stood for the Ultimate Driving Machine

Here’s a question to ponder: is Munich’s most famous car company still the same one we fell in love with in the 20th Century? Smooth and revvy engines, elegantly restrained styling and an emphasis on fluid handling made BMW the de facto choice for enthusiasts, but the proliferation of SUVs, the growing moves towards electrification, and the just-announced switch to front-wheel drive for the next-generation 1 and 2 Series must surely feel like a betrayal of sorts to those who’d believed the company would uphold its longtime core traditions.

But while the company marches towards an unrecognisable future, in 2019 at least, there’s a part of it that feels like a last, magnificent hurrah of the past.

The BMW M2 Competition is the new baby of the M-car range. Unlike its much bigger brother, the M5, you don’t get to choose between a standard car or the Competition version – the M2 Comp is effectively the new M2.

So, if that’s the case, surely the changes would be only skin-deep? Err, no. Under BMW M’s new nomenclature, Competition models sharpen up the excitement and fury of a regular M car, without getting too uncompromisingly hardcore like a CS, GTS, or other limited-edition model.

Therefore, under the M2 Comp’s bonnet you’ll find a slightly detuned version of the M3/M4’s S55 engine, whereas the M2 previously used an up-tuned version of the N55 engine from the M235i. Thanks to a closed-deck engine block, lighter crankshaft, strengthened pistons and most significantly twin turbos (the old M2 was single-turbo), the M2 Comp develops 410hp and 550Nm, 40hp and 50Nm more than before, and its rev limiter kicks in 500rpm later to boot, at 7,500rpm.

For reference, that’s nearly the same power figure as an M3 from a decade ago, and more than an M5’s from two decades ago.

The M3 and M4 also donate their rather impressive looking carbonfibre strut brace, ostensibly for better body rigidity and steering precision, while larger M Sport brakes and recalibrations to the stability control and rear differential round out the hardware changes.

Changes on the visual front are less extensive, with enlarged kidney grilles and air intakes, new wing mirrors and a new rim design being the only noticeable revisions.

That’s not to say the M2 Comp is subtle though, certainly not compared to a regular 2 Series. Even without the stickers, the M2 Competition is not for shrinking violets. From the aggressive front airdam to the quad tailpipes to the 19-inch Y-spoke rims to the swollen wheelarches that bulge like The Rock’s biceps, the M2 is far less discreet than anything else in the M family, as befitting something small and less grown up.

The driving experience, if anything, is even more rambunctious. Thumb the bright red starter button and the flare of revs and busy idle give you a good idea of the fun to come.

Stab the throttle and the 3.0-litre six snarls menacingly, serving up aural fireworks in the form of burbles and crackles from the exhaust. Wring it out and the noise takes on a harder-edged zing at higher RPMs that tingle the spine more than the old M2’s could. Extra power and torque be damned, this is an engine you want to take to the redline time and time again just for the hell of it:

Naturally, 410hp makes for literally breathtaking acceleration (0-100km/h is dusted in 4.2 seconds), and in this package feels like the very upper end of what you can reasonably exploit on the road. It’s difficult to fathom pushing something like the 600hp M5 or even the forthcoming 470hp (rumoured) G20-generation M3 anywhere like as hard without scaring yourself absolutely shitless.

Only marginally smaller than the M2 Comp’s appetite for revs is its appetite for corners. I can’t say for sure how much difference that big strut brace has made, but be in no doubt that the car’s front end shows absolutely no lethargy when it comes to directional changes, and the rear end is biddable to mid-corner line tightening. You do need to have your wits about you, as the combination of big power, rear-wheel drive and a short wheelbase is one that doesn’t suffer fools lightly, but at least you don’t feel like you’re hanging on to the controls for dear life.

Thank goodness then, for the advancements in traction/stability control technology, which eliminates much of the terror of manhandling the car on the road; praise in particular is due for the stability control’s intermediate M Dynamic Mode, which allows for just enough wheel slip and lateral yaw (read: oversteer) to have some decent merriment without killing yourself.

While the M2 Comp is naturally most at home on a racetrack, it’s also surprisingly practical despite its nature. Its upright 2-door saloon shape might not be the last word in slinky sexiness, but it does make for ample space for two rear passengers. Put this way, you could even say the M2 Comp is its own antisocial social club, as it means you can bring your friends along to partake in your loutish behaviour.

The ride at low speeds and over small imperfections may be niggly, but that’s to be expected from such an overtly sporting machine. What’s not expected though, is how the stiff setup actually improves ride comfort in certain scenarios: the tight spring and damper rates not only help the M2 go round corners more quickly, but also jostle occupants a lot less over any offset undulations (such as crossing a carpark hump diagonally).

The M2 Comp finds itself for the moment in a market short on rivals. The Audi RS 3 has been discontinued in Singapore and a new Mercedes-AMG A-Class is still a long ways away, but even then they’re still less playful front-drive-based hatchbacks. At the other end of the spectrum and offering more poise is the Porsche Cayman, but for the same price as an M2 Comp ($327,888 with COE) you’d be stuck with a base 300hp Cayman that’s less practical and two cylinders short of a symphony.

But perhaps it’s best to think of the M2 Comp in terms of what it means to BMW’s fans. Given the switch to front-wheel drive UKL architecture for the next generation 1 and 2 Series, the M2 Competition might just be the last compact, sporty, rear-drive BMW we’ll ever see. If this really is the finale of the archetype that arguably cemented BMW’s reputation for driving prowess, we can hardly think of a better send-off. 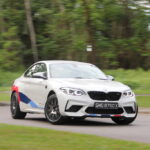