Snazzy new design and lots of features means Hyundai’s mid-sized sedan stays true to its nature in Singapore, despite the name juggling

SINGAPORE – What’s the name of Hyundai’s mid-sized sedan, you know, the one that’s not a compact sedan (that would be the Accent), nor the big one (Sonata), but is usually priced at under $100k with COE, and is the sort of thing you’d buy if you didn’t want a Kia Cerato or Toyota Corolla Altis?

You can imagine asking a crowd that and two people responding at the same time, with equal certainty: ‘Avante!’ and ‘Elantra!’. That’s because they’re both not wrong, or at least correct for certain periods of time – the previous Hyundai mid-sized sedan was the Elantra, as reviewed by us in 2016, and in 2014.

Before that though, it was called the Avante, and to make things worse, the same cars were known by either name in different markets.

Elante! Avantra! Avra Kedavra! Or something…

Onerous, and quite pointless, but it’s important to get all of this out of the way before we talk about the newest Avante – yes, it’s Avante again, here and now.  To be fair, it seems to be a Korean thing, as Kia also played a trans-generation game of ‘Cerato’ and ‘Forte’ and even ‘Cerato Forte’ with its own Avante/Elantra rival.

Hyundai’s gone all tear-up-the-rulebook, and the Avante looks tremendously different. It’s gone totally straight-edge sharp-angles, a bit like Lexus and Audi have, the super-triangular front end looks almost totally geometric, and the last thing you’d expect from a Korean car.

That makes it even more delightful, in our opinion. 2019 – the year when two Korean budget sedans are amongst the most interesting looking, and best-designed cars on sale. Imagine if you told someone that ten years ago, they’d tell you to go back to making kimchi.

The only thing we’d nitpick on is the fact that with so many design language morphs, not just by generation but even within car half-lives, it’s difficult to pin down what exactly makes a Hyundai a Hyundai, looks wise. Some continuity from the previous design, which has only gotten better with maturity, would have been good.

Despite the rule-book shredding, the Avante’s actually a major facelift of the extant sixth-generation model, which back in 2016, set a great standard of what to expect from a Korea mid-sized sedan.

However the ensuing years haven’t just seen COE prices drop, and while the car’s gone from $100k-plus with COE to start at $75k with COE, there’s also been much more intense competition from direct rivals (sister brand Kia’s tremendously impressive new Cerato springs to mind) and oblique ones like small crossovers.

Model-range-wide additions include a new infotainment system, which is a colour touchscreen unit that’s capable of Android Auto and Apple CarPlay connectivity, as well as Bluetooth connectivity, plus drive modes which include Eco, Sport, and Normal.

Six airbags and a reverse camera as standard gain the Avante points on safety, although only the higher-spec models have an electrochromic rearview mirror, and only the Elite has the all-useful Blind Spot Detection.

There are so many additional features on the Elite – and one’s which we would consider almost essential – that driving the base model would simply be an exercise in inconvenience, and these include keyless entry/start, an electric driver’s seat.

Stand-out features on the Elite include wireless device charging, ventilated seats, full LED headlamps/DRLs, Blind Spot Detection. Consider also, it’s a mere six percent ($12k) price premium for the Elite over the base model – if you’re looking to spend the least amount possible, then you should just get an Accent.

The same 1,591cc Gamma engine, which we’ve known for at least half a decade, has had some very minor tweaks to make it Euro VI compliant. Those are un-noticeable to a regular driver, it strolls along along delivering smooth, non-turbo power like it always has. It, along with the six-speed automatic gearbox, do their best impression of not being there at all.

In fact at idle, it’s still so quiet and vibe-free you’ll wonder if the engine’s on at all, and excels at trouble-free commuting in the city. For a sedan, the ride is generally good, though isn’t the most settled despite the 16-inch wheels.

It’s a budget sedan after all, so the Avante isn’t the sort of car you would set Singapore-to-KL record times with, as it’s not so adept at higher speeds.

The new drive modes are useful, ‘Eco’ is probably the most relevant to an Average Joe driver, rather than ‘Sport’. Those who lament the absence of modern turbo power, like we did in our previous review, can now turn to the new ‘Hyundai Europe’ i30 hatch, wagon and fastback range.

Modern additions to the cabin, that is the smartphone integration and wireless charging, are very welcome and add real value and utility. There’s still lots of hard plastic on the doors, which lowers the tone some, but the Avante focuses a buyer on what they’re getting, rather than what they’re not.

In other words, the name may have changed, but the Avante stays the same with its core tenet of big value and lots of car for the money. 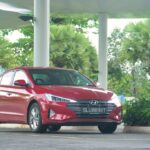