A drive in the facelifted Hyundai Tucson is likely to be a forgettable one – but that’s a good thing. Here’s why.

If you’re of the disposition that machines are built only to serve, then you might equate a good family car with a good butler: that it fulfils its duties so competently and discreetly that you never need to pause and give thought to what’s going on behind the scenes. In that regard, the new Hyundai Tucson ticks those boxes, and then some.

Changes on the outside are few, but that’s not necessarily a bad thing as the Tucson is already, we feel, the most cleanly-styled contender among mid-sized Asian crossovers. Externally, the changes are kept to new LED head and taillights and a slightly reshaped grille. It all looks pretty Audi-esque if you ask us, especially the way the headlights blend into the huge “cascading” grille.

On the inside, there’s an entirely new centre console layout, with the infotainment touchscreen standing free instead of being nestled inside the dashboard like before. Not only does this allow the dashboard’s top to be lower, increasing the sense of space, but it also pushes the screen up into your line of sight, making it less of a distraction to use.

It can all be summed up as being pretty simple and easy to use. We particularly like how big and chunky the buttons are, especially in their use as hotkeys for the infotainment. When it comes to operation on the move, the tactile feedback you get from having something physical to press is a major boon to safety, as you’re not distracted looking around for the correct spot to jab your finger.

Driving the Tucson is similarly fuss-free, in that there’s nothing about it that stands out or surprises; it’s just crushingly effective at providing practical family transport. The 1.6-litre turbo engine for example, does sound and feel a bit rough, but there’s no denying the kick that its 175hp and 265Nm is able to provide.

Meanwhile the software for the seven-speed dual clutch transmission has been tweaked, shaving 0.2 seconds off the century sprint for a total time of 8.9 seconds; more than enough for any ordinary situation.

Of course, performance isn’t necessarily the remit for a car like this; the passengers are the priority. To that end, the Audi (and other premium cars) connection comes to mind again – if you were blindfolded and bundled into the back of the Tucson, you’d never guess you were in something Korean.

Like a lot of recent Hyundais (the i30 in particular), the Tucson is almost like a sensory deprivation chamber – very little wind and tyre noise reaches your ears, and if you’re only giving it light throttle, it can be difficult to keep track of whether the engine is actually running. Same goes for ride comfort, the Tucson wafts over bumps that might otherwise cause car sickness in other competitors; we’re pretty sure the sensibly-sized 225/60 R17 tyres help in this regard.

In keeping with SUV form, versatility is well accounted for. Not only can the rear seats fold flat in a 60/40 split, they can also recline backwards to what feels like a 45 degree angle once you stow the rear cargo cover in its slot in the boot. 488 litres of storage capacity is about average for this class, and you can’t change the boot floor height, but that’s only because the Tucson comes with an exceedingly rare feature these days: a full-size spare tyre. The extra security and peace of mind this provides is a very worthy trade-off, we think.

Speaking of features, we finally arrive at the area in which the Koreans have been slaying the competition. If you can live without the panoramic sunroof (a $3000 option), the Tucson 1.6 Turbo S comes with: blind spot detection and rear cross-traffic alert, wireless phone charging, a leather-wrapped steering wheel and electric tailgate, all decidedly premium-level features.

All in, driving the Tucson in and of itself won’t leave much of an impression. But like the faithful butler who is always waiting in the wings to predict and cater to your needs, so too will the Tucson serve you in a way that will leave your feathers unruffled. Best of all, the cheap price (starting at $110,999 with Certificate of Entitlement) belies the car’s capabilities, which makes the Tucson one of the most sensible offerings in this cutthroat segment. 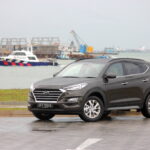