There’s a lot going for the Lexus UX, and we’re guessing you probably want one. The question is, which version do you go for?

Make no mistake, the Lexus UX is undoubtedly an appealing choice in the baby luxury crossover segment – not least because none of its rivals can claim to deliver a knockout package.

But if you’ve just read our earlier review of the UX 200 and decided you want a Lexus UX in your life, the next question you need to answer is: exactly which UX?

That’s because, as has traditionally been the case with most Lexus models, the UX comes in two distinct flavours: petrol and hybrid, with the premium for the latter being $10,000 spec-for-spec.

Not that you’d be able to tell just by looking. Apart from the blue-highlighted Lexus emblems, “Hybrid” badges on the rear doors and the little extra ‘h’ on the bootlid, there’s nothing to set the hybrid UX 250h apart from the 200. Slightly annoyingly, that even extended to the metallic orange paintwork our two test cars wore.

As with the UX 200, the UX 250h is available in two trims, Executive and Luxury, which apart from the addition of a Nano-E air purifier, mirror the former’s spec exactly.

To that, the Luxury variant adds upgraded leather, ventilated seats (plus memory function for the driver’s), a surround-view parking camera and blind spot monitor with rear cross traffic alert.

So with the toys the same, the main difference boils down to what’s under the bonnet.

The two share the same 2.0-litre four-cylinder engine, but the unit in the UX 250h is tuned differently to better suit the characteristics of the hybrid system.

We won’t bore you with the nitty-gritty details, but the end result is a drivetrain that’s not only faster (on paper), but significantly more economical too. Combined, the UX 250h’s petrol-electric setup puts out a total of 181hp, compared to the UX 200’s 170hp, which results in a faster 0-100km/h time (8.5 vs 9.2 seconds).

Beyond the figures though, the differences are even more stark, particularly in around-town driving. Thanks to the immediacy of the electric motor, the UX 250h steps off the line a lot more effortlessly than its petrol sibling, allowing you to keep up with the fast n’ furious taxi uncles away from traffic lights.

The car can also operate in pure-electric mode at low throttle loads, all the way up to highway speeds. Both this and the low-speed electric assist help contribute to the general sense of unruffled refinement that a Lexus is typically known for.

That said however, the hybrid system does also detract from UX’s generally fun to drive nature, with the electric motor’s brake regeneration imparting a mushy feel to the brake pedal and inconsistency to the steering’s weight that saps confidence through the twisties.

The hybrid makes do with a slightly smaller fuel tank and boot, at 43-litres and 264-litres each, which means four-litres and seven-litres less than the UX 200, respectively

Despite the immense similarities between the UX siblings, their different hearts really do make for two distinct personalities.

The UX 200 is the one to go for if you want something that’s more fun to chuck around, while the UX 250h is better suited for more relaxed drives.

Given the extra low-speed refinement, greater fuel savings and $10,000 VES rebate, there’s more than enough value in the UX 250h to offset its $10,000 dearer sticker price, which means that whichever UX you choose, there’s pretty much no way you’ll lose out. 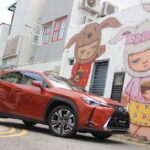