More Mercedes power for less cash: The hybrid edge pushes the Mercedes-Benz C 200 to the front of the C-Class queue

The facelifted W205 Mercedes-Benz C-Class is here, and we’ve already tested the C 180 model on CarBuyer.com.sg, and pronounced it smooth as a baby’s bottom.

Under the bonnet, it was business as usual for the C 180, which has been powered by a 1.6-litre turbo inline four and automatic gearbox since what seems like forever.

The new C 200 turns that equation upside down thanks to hybrid technology. As we reported last year from the global launch, yes, the C 200 is a hybrid and there is no petrol-only alternative. Important since Singaporeans bought a whole lot of sedans – Mercedes ones too – last year.

But before conservative buyers start screaming and running in the other direction know this: The C 200 not only doesn’t feel like a hybrid, it’s cheaper than ever before. We’re sure that got your attention!

The 1.5-litre engine in the C 200 is an all-new development, with Mercedes boasting improvements in friction reduction and smoothness, and it’s equipped with a twin-scroll turbo (just like BMW’s TwinPower turbo engines) – there’s also a 258hp 2.0-litre in the forthcoming C 300 model.

The EQ Boost system, as Mercedes dubs its electrified tech, is a 48V ‘mild’ hybrid system meaning the car can’t move on electricity alone, but the engine shuts off at a standstill or during high-speed coasting.

Audi has done the exact same thing with its A6 sedan above, and presumably the next A4, with 48V technology allowing for lighter, better-performing electrical components. For example, the new engine’s water pump is driven electrically so it doesn’t leech mechanical power, and it’s adaptive too depending on the load.

The other benefit is from the 14hp/160Nm electric motor, which adds its power to the main drivetrain just before the engine’s turbo boost kicks in. Looking at the torque figures for the C 200, it also presumably means the engine can do less work at its most inefficient stage (the low speed acceleration stage), as the torque peak only kicks in from 3,000 to 4,000rpm, compared to 1,200-4,000 rpm for the C 180.

Besides the EQ tech, the price difference nets you a nine-speaker Burmester sound system, black open-pore wood trim, nicer leather, and a rear blind. The conventional instruments shown in this particular test car aren’t standard – buyers will receive the HD Cockpit model with a 10.25-inch main infotainment display, and 12.3-inch active instrument panel as seen in our C 180 review.

Having a hybrid system gains you more fuel savings in traffic, but the car also conserves fuel with coasting (rolling along with the engine disconnected) and ‘sailing’, which is the same as coasting but shutting the engine off and using the electric motor to cruise for short distances at higher speeds.

We were able to achieve better efficiency results in the C 200, around 7.0 to 8.0L/100km, anything sub-9.0L/100km is decent for a executive sedan. What’s more certain is that the efficiency improvements are there.

With all that electric tech onboard, one would expect the driving experience to be vastly different, but it’s actually not. In fact, we get the distinct feeling Mercedes has done this on purpose.

There are no ‘EQ’ or similar badges (remember ‘BlueEfficiency’ tags from older Mercedes cars?) to mark the C 200 out as a hybrid, the only difference being an ‘EQ’ drive gauge on the instruments that show if you’re using power or re-cuperating it.

The belt-driven starter-alternator makes engine kick-in/out smoothly and is almost imperceptible, unlike most iterations of start-stop on Continental hybrids, this one is very Toyota-like – and that’s high praise.

You can’t feel the e-boost on power too, it’s blended into the drivetrain’s power delivery you simply feel like the car is driven by a particularly smooth turbo engine as usual.

There’s an extra punchiness to call up on, what with the engine now having 184hp and an added 14hp, it certainly makes the car capable of lively launches, though as a C-Class, it has the sort of relaxed, calming nature that’ll make you in no hurry to get places.

So instead of changing the game in an obvious fashion, ironically hybrid tech makes the C 200 even more of a C-Class than ever: It’s refined, handles effortlessly, and has lots more onboard tech.

Thanks to hybridisation,  you have added benefit of even more smooth power paired with efficiency benefits. Electric vehicles are exciting and headline grabbing, but cars like the C 200 are how the electric revolution will really gain traction. 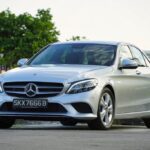