A European performance sedan for S$132k with COE: Could Skoda’s hottest model be all the car you’d ever need in Singapore?

“Staid” and “sensible” are usually among the first things that spring to mind when it comes to Skoda. Cars like the Superb, Karoq, Kodiaq, and indeed the Octavia are popular award winners because of their practicality and value for money, so it’s perhaps slightly at odds that there exists a Skoda built with a less practical function in mind: speed.

Yet, a hot Skoda isn’t a new or novel idea, as each generation of Octavia has featured an RS model since 2001 (after Skoda joined the World Rally Championship); the company also has plenty of motorsport heritage throughout its over century-long history.

The Octavia RS 245 is the latest model in this lineage, and it’s also the fastest so far. Unsurprisingly, it offers a characteristically Skoda take on performance, with shedloads of practicality, proven Volkswagen-derived parts, and unbeatable bang for buck.

Just how much buck, you ask? Just $134,900 – and that’s including a Certificate of Entitlement. For reference, that’s about the same as most hundrum compact SUVs; its closest true performance rival is the Hyundai i30 N, at $8k more, while its corporate cousin, the Volkswagen Golf GTI, is a whopping $40k dearer.

It’s not like you’re getting less bang for your money either, quite the opposite in fact. On paper at least, the RS 245 is the sharper tool, as it shares its mechanicals with the GTI Performance Pack, an upgrade package we don’t receive here.

What that entails mechanically is a bump of 15hp (to 245hp, hence the name) and 20Nm of torque, to 370Nm, as well as – more significantly – the presence of an electronically-controlled limited-slip differential (LSD) as opposed to the GTI’s brake-based XDS system.

It does however, miss out on the GTI’s adaptive dampers, making do with passive units and a lowered (by 15mm) ride height.

For the most part, the changes aren’t very noticeable in isolation. The two cars do share their underpinnings, after all. You’d be hard-pressed to feel the EA888 engine’s extra grunt without a back-to-back drive, and on paper at least the RS 245 is actually 0.2 seconds slower in the 0-100km/h sprint at 6.6 seconds.

That said, the swell of torque in the mid-range is stout and addictive, and the revs pile on with a touch more enthusiasm, but overall the engine delivers its robust punch without drama or fireworks.

It’s rather a similar tale for the dynamics. The GTI was never the most thrilling of hot hatches, and with its extra length the Octavia is less agile still.

Even with deliberately ham-fisted steering inputs, the RS 245’s rear axle refuses to get involved and help with the car’s corner-entry rotation, even if the stiffer dampers make for an accurate front-end and tight body control. Its unwavering stability and security mean the RS 245 is a car for covering ground rapidly, rather than engaging in silly antics like what the Renault Megane RS constantly goads you into.

Contributing the most to that sense of cross-country pace – and also where the biggest difference over the GTI lies – is in that front differential. Corner exits are where the RS 245 shines and provides the most satisfaction.

You can actually feel the steering weight load up to pull you tighter into the corner, as the LSD clamps down on the front axle with an iron grip, locking the front tyres to their currently described arc instead of understeering wide.

If there’s one foible we have with the RS 245’s drive though, it’s with the seven-speed gearbox. Slurred gearchanges on anything apart from literal full throttle upshifts gives the impression of a slipping clutch and is a curiosity we’ve not felt in a DSG before.

It’s noticeable but not a hindrance while pootling around, and you probably wouldn’t encounter it when pounding round a racetrack, but on a B-road blat where you spend more time coasting or on part-throttle, it does suck some fun out of the process.

But though the RS 245 lacks in exhilaration, on the flip side it trumps all other rivals – and pips the GTI – in terms of daily liveability. Just like the regular Octavia, the cabin is commodious and the boot truly gargantuan. True, the fixed-rate dampers mean the RS 245 can’t achieve the same duality of character over rough and smooth roads that the GTI can, but though the ride is firm it isn’t punishing.

To top it all off, there’s plenty to remind you that the RS 245 is a special car. For starters, there’s a subtle but aggressive bodykit, rear spoiler, blacked-out grille and wing mirrors, and handsome 18-inch rims, not to mention our test car’s stunning-under-all-lighting Rallye Green paint.

Inside, all the expected touches are present and correct, such as a more sculpted steering wheel, RS badging and red stitching everywhere, but the biggest treat are the suede seats, which look racy and also grip your back and bum most tenaciously during hard driving.

You do lose out on the GTI’s excellent digital instrument panel which is extremely useful for navigation purposes, but the 9.2-inch touchscreen system shared with other VW Group products is still one of the best in the business.

Practicality and ease of use are bonuses in any performance car, though humdrum factors like that aren’t their raison d’etre. But even though the Octavia RS 245’s figures generally don’t startle, its biggest and most important figure does.

There’s simply no escaping the massive price difference between this and other sporty models. Hyundai i30 N aside, you’re looking at a $30-40k premium for contenders as varied as the Kia Stinger 2.0, Subaru WRX, VW Golf GTI, and Renault Megane RS, which makes the Octavia RS 245 a veritable bargain.

Factor in the space on offer and you could even legitimately convince the missus that you don’t really need that SUV after all. The Skoda Octavia RS 245 really is a car that can do it all, and it’s a lot more attainable than you might think. 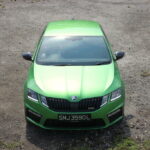