With an emphasis on safety, spaciousness and sporting-style, the new Toyota RAV4 looks and feels better than ever and is appealing at sub-S$130k with COE

Rod Stewart seemed to be doing a personal pitch to me. Not in that way, as I doubt I’m his target audience, but it was a fitting song because I had just laid eyes on the new Toyota RAV4 sport utility vehicle (SUV).

For a brand that, according to some people, makes boring cars, this Toyota RAV4 didn’t look boring to me. In fact, it looked like something right up my alley. (Hanwei’s alley probably is full of neon lighting and weird people. – Editor)

Like a couple of its relatives (such as the Toyota Tacoma pick-up overseas and the Toyota C-HR back home in Singapore), the new Toyota RAV4 has a face characterised by sharp edges and strong lines, which really makes it look way different from the previous iteration. The wide headlights glare at you with an attitude (along with a disapproving ‘jaw-clench’ grille), an attitude I can appreciate.

Lately if you’re going the SUV route, very loud and very proud seems to be the chosen tack. I happen to agree with that, so the Cyan Metallic colourway certainly appealed to me, though not everyone will like a car that’s Smurf-coloured.

We can point fingers at Porsche doing the same, with the Macan, but if you’re not a fan of what would make a great colour for a Transformer, Toyota has eight other options for you to choose from.

Speaking of transforming, the RAV4 has evolved quite a bit, technologically, and that’s very apparent on the interior.

The new car makes the shift to digital instruments, the speedometer and multi-info display now on a 7.0-inch full colour screen (flanked by conventional dials for revs, fuel, and temperature) with the colour theme changes as you toggle between the standard driving modes of Normal, Eco and Sports.

The central console consists of a wireless charging system, and that’s in addition to three other fast-charging USB ports located in the front and back of the car, so no FOMO due to a lack of power/ports.

Meanwhile, there was no lack of space in the entire vehicle. The boot can fill up to 547-litres, with 60:40 folding rear seats giving you flexibility, and it extends to 700-liters of space with the seats folded and the tonneau cover off.

That’s quite big, with that figure the Toyota RAV4 is the best in its class in luggage room. That number is significantly better than the Mazda CX-5’s 506-litres and the Subaru Forester’s 505-litres.

Furthermore, the boot door can be customised to only open to a certain height, certainly helpful for those with lesser reach. But make sure you pay proper attention to the Toyota Sales Executive, because I wasted a few good minutes kicking the bumper to activate the kick sensor, before blindly succeeding.

From cupholders to open trays, each compartment has been fitted with anti-slip surfaces to give the driver and passengers an easier time in the vehicle.

And with the boot door raised (phew!), there also appears two hanger hooks on either side – These hanger hooks can hold up to 6 kg in weight and were made for you to have a quick change of clothes, a tad superfluous but certainly useful to some people very into cycling or sports (SUV, after all) – 10/10 would try again.

READ MORE: The Toyota RAV4 and the list of top Crossovers/SUVs at the 2019 Singapore Motorshow

As much as I love judging cars by their number of hanger-hooks, the Toyota RAV4’s handling and performance also plays a big part in its appeal.

There’s only one variant of the car available in Singapore, and it comes with a 2.0-litre, non-turbo engine that has 170hp, mated to a classic Toyota choice of a continuously-variable transmission. Like its smaller, more luxurious cousin the Lexus UX though, this is the new Direct Shift CVT.

As explained in our Lexus UX 200 review, “it has a conventional torque converter and single-speed planetary gear that’s used for take-off and acceleration, after which it hands over to the CVT” so it feels more like a proper auto and not a sludgy CVT.

As part of the new Toyota New Global Architecture (TNGA) approach (read more about TNGA in our Toyota preview at the 2019 LA Motorshow) to building cars, the new RAV4 is claimed to offer better handling and stability through a lower centre-of-gravity.

The way the RAV4 rides certainly backs that up, as it made me feel more ‘in’ the car, rather than the perched on feeling one often gets with SUVs, I felt nicely settled, almost like I was driving a hatchback rather than a soft-roader.

I mainly engaged in two driving modes (Normal, Sport) but as typical of a Toyota the overarching feeling is one of smoothness and calm progress.  If I were to nitpick, the acceleration from pick-up lacked the instant sense of urgency a modern turbo brings, but sustaining higher speed was no problem. Sport mode does deliver extra zippiness, but Normal mode is perfect for taking the edge off the daily grind with its quick, smooth power delivery.

While Japanese cars have been behind the curve in terms of advanced safety, mostly due to cost reasons, the big guns of Japan are now aiming at improved, active safety systems on board.

Honda has begun introducing its Honda Sensing suite of tech with the Odyssey MPV last year,  while Toyota has responsibly added the Toyota Safety Sense (TSS) package to the RAV4.

Our only quibbles were, ironically, technology-based: There’s digital instruments and foot-free cruise control, but the the entertainment system is still relatively unsophisticated in this day and age, with no touchscreen but buttons, and it lacks advanced smartphone connectivity like Android Auto, though admittedly it may not be a huge priority for some buyers.

We also missed a rear-view camera for reversing. Having been used to what was a pretty standard offering these days, the feeling of parking with a 100% reliance of the side mirrors made me feel as old as Rod Stewart.

But here’s the kicker. If these two factors are deal-breakers for you, Toyota’s $3,000 Audio Head-Unit upgrade will add a 9.0-inch touchscreen (with Android Auto connectivity), complete with reverse cam that will make memories of Rod Stewart a thing of the past (dang, three birds with one stone!).

The new RAV4 brings great performance onto the table, but most importantly, Toyota will not be charging you a huge premium for it. At S$126,988 with COE, the price compares well with anything from the CR-V ($131,999 with COE) to the Volkswagen Tiguan Comfortline 1.4 ($141,400 with COE), and that’s a big win indeed.

Safety will never go out of style and the Japanese manufacturer shows it’s willing to go big on safety for its customers, at no significant price increase. Despite featuring a very different look that shows almost no smooth edges, the 2019 Toyota seems the same RAV4 as always: It’s easy to drive, there’s lots of space and utility, and the huge plus is that you and your passengers will now enjoy a much safer ride.

The RAV4 has certainly gotten on the radical re-design wagon, and while everyone loves crossovers, it’s not going to be a universally accepted design. But the RAV4 packs something you can’t see which will really help it win fans – especially mothers: Advanced safety.

The TSS package consists of active safety technology designed to either avoid accidents or to lessen the damage in the event of one. Active safety, which involves automated systems helping the driver without additional human input, are an important step forward for car safety.

In other markets, TSS comes in two grades, P and C. P, which the RAV4 has, features five systems, while the more basic C grade has three, as seen in the image. To note, local distributor simply uses ‘TSS’ to describe it, there’s no P or C distinction locally.

The Steering Assistant comes with Lane Departure Alert (LDA), which identifies lane markings in front of the vehicle. If the car was to veer slightly off-lane, a beeping sound reminds the driver to straighten his steering wheels. And if that proves to be a challenge, the rack assisted Electric Power Steering System provides little nudges on the steering wheel to help the car stay in lane.

Some find this irritating, but personally I thought it helped me drive better. Due to the LDA,  I had an easier time keeping to lanes and when I felt myself steering off-course back in my own car, the Pavlovian response was to correct myself due to the beeping in my head. As much as you can control yourself, traffic around is often unpredictable. When others don’t play nice or are simply unaware, the Pre-Collision System (PCS) and Automatic High Beam (AHB) can help. PCS identifies cyclists and pedestrians that are near to the car and calculates the risks of collision, if any. In certain trying conditions, the vehicle may even brake automatically.

And since we’re on the subject of safety, you’re fully covered in the RAV4, since it packs seven airbags, Vehicle Stability Control and ABS, plus auto rain-sensing wipers for visibility in rain. AHB detects oncoming cars from up to 600m away and will automatically switch the high beam on and off to enhance visibility, it makes night-time driving safer for everyone. Maybe not so useful in brightly-lit Singapore, but very handy on a night-drive up in Malaysia.

Dynamic Radar Cruise Control (DRCC) is something we’ve seen in European cars for some time, and it’s a welcome addition to the RAV4. For first timers testing it, it seems freaky to let a car drive itself, but the learning curve is extremely gentle. 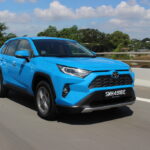 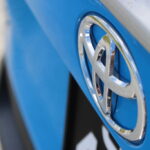 Loo Hanwei
Hanwei is the newest member of the CarBuyer Singapore team, and the only member to admit to actually watching football for personal enjoyment. He has never been mistaken for a Korean rapper, but the day is surely approaching fast.